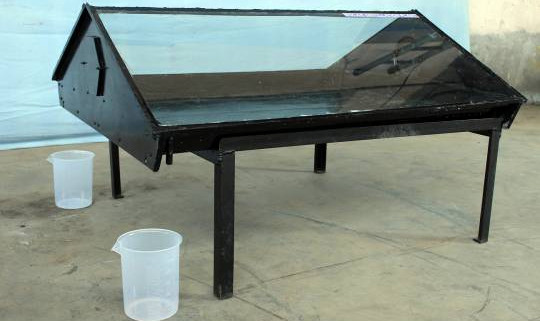 In nature fresh water is produced by a hydrologic cycle solar radiation is absorbed by the ocean causes evaporation of water from the surface. The vapour so produced increases humidity and temperature of the air above the sea surface. This humid air then works on the same principal.

The  saline water is kept for distillation at a shallow depth normally 50 mm.  In an insulated basin. A sloping pane of a glass supported by appropriate frame, covered the basin and is sealed tight to  maize vapor leakage. A trough runs along the lower edge of the glass pane to collect the distillate and carry it out of the basin.

Solar distillation is basically a simple process. The transparent glazing acts, as a condenser for water vapors generated from the transmission of the solar radiation through glass which is absorbed in the basin turn heats the saline water. The still can be operating with saline water being fed continuously to the basin or on a batch schedule. The still assembly should be located in the shadow less area and should be oriented such that top slopping glass cover slants towards south, to ensure maximum in take or solar radiation.

Because the salts dissolved in water are non volatile they remain in the residual brine when water is evaporated.

The output of distilled water will very with variation is solar radiation and so there is year round variation of output. On  an average 3.5  mtrs/m2/day of distilled water is obtained with the Solar Still. More output can be obtained by preheating the saline water in a solar collector prior to feeding to the still.

In many villages in our country the people are  facing hardships in getting potable water. The rainwater stored in leaks rapidly becomes stagnant and polluted.  Underwater such circumstances, Solar Stills avoid virtually all the problems by giving clean pure water.

Under drought conditions, with desalination of sea water and  other camp such as those for constructions often find it difficult to get portable water. Our Solar Still shall serve them drinking water.

Traveling in the desert and inhabitants of a remote temporary camp such as those for constructions often find it difficult to get portable water. Our solar Still shall serve them  drinking water.

Laboratories, Schools, Hospitals, Petrol Pumps,  Garages to require distilled water for there various application. Our Solar Still mounted on terraces or on grounds is being used by these people.

Want to join the discussion?
Feel free to contribute!